Good had its official UK premiere on 17 April, 2009; it is widely available on DVD and Blu-ray

" . . . The willowy Whittaker shot to fame with her debut in "Venus," a quirky tale that pitted the newcomer opposite legendary actor Peter O'Toole. The role earned Whittaker a BIFA Award as "Best Newcomer."

"After working with Peter, Viggo and Jason -- I am spoiled for other actors," Whittaker laughs. "These guys are all about the job, not how many times you're [sic] picture ends up in People magazine."
Top

Great job with the reviews, guys! This is the first opportunity I've had to sit down and read them, so it's much appreciated!
Top

"These guys are all about the job, not how many times you're [sic] picture ends up in People magazine."

This reviewer didn't 'get' the movie but he still loves Jason. 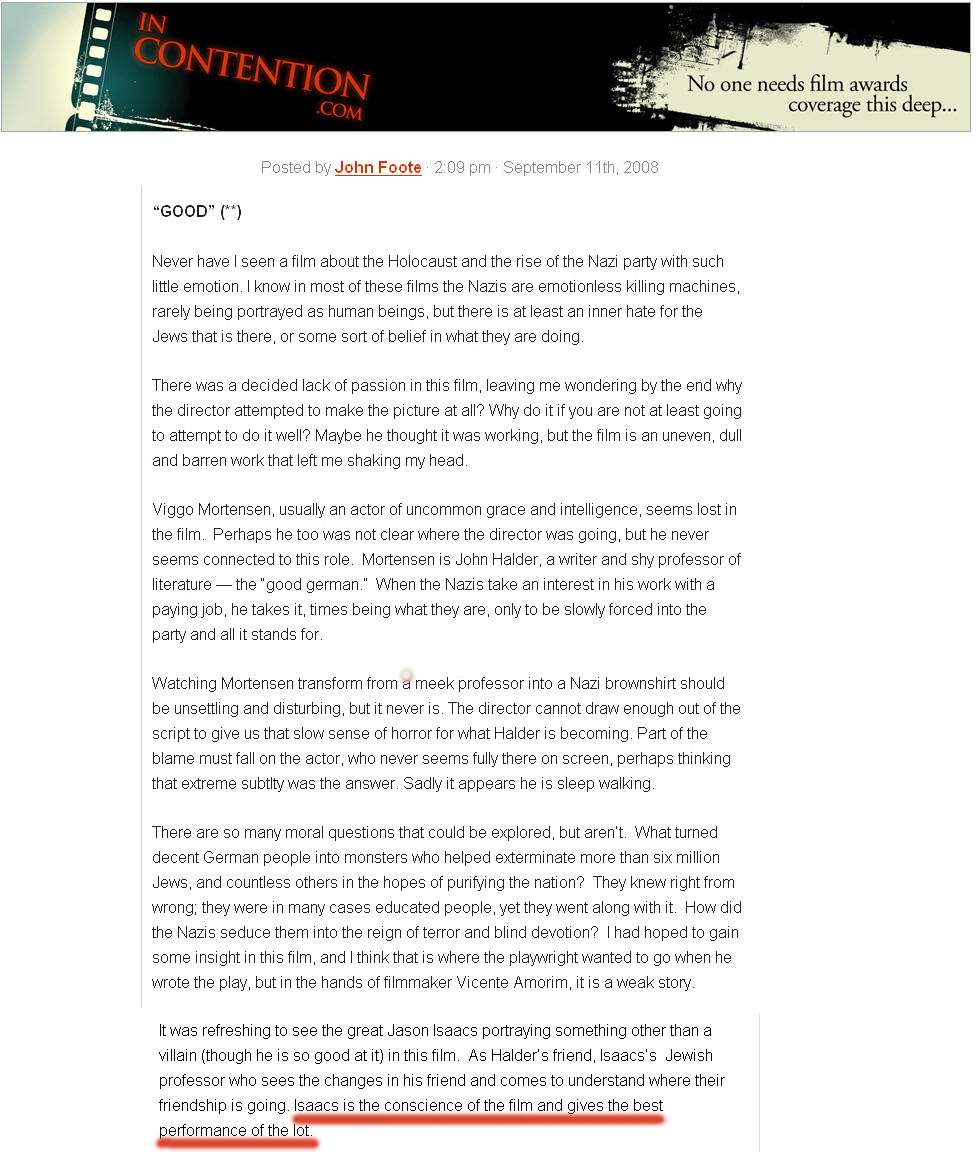 This reviewer knows how fantastic Jason is...."the great Jason Isaacs" and also stating..."Isaacs is the conscience of the film and gives the best performance of the lot!!" Absolutely wonderful!!

I have to agree with the reviewer that the Halder of the play is a decidedly passive creature, many of whose actions are not examined at all.
But snaps for that notice of Himself!
Top

How many times do we have to read reviews like this? "... Jason Isaacs gives the best performance ..."

He has done so many films that have gotten bad reviews and yet the reviewers complimented his performance (and rightly so!) I just wish Jason could get a break and work on a film that gets some positive recognition (both financially and award wise!)

I still want to see this movie.
Top

It's very nice to read positive things about dear Jason, he deserves recognition!

In my opinion, Jason's usually the best thing in just about all the movies he's in, and that's not just a biased, fangirl opinion.
Top

We can only hope that the critics will finally reward this " best performance" come Oscar time.
Top

I have never ever seen a bad review of Jason...in a very bad movie he is always "the only good performance" or "the only redeeming thing" etc. UNDERRATED!!!!!!!!! When will it end?
Top

Jason responds to a critic ...

Jason Isaacs combats the critic who criticized his latest film, "Good." Based on the CP Taylor play, "Good," with Viggo Mortensen, examines how even good Germans signed on with Hitler and the Nazis.

Jason Isaacs emailed me after I dumped on his new film, "Good," for being heavy on British accents despite its 1930s-Germany setting.

"Good," with Viggo Mortensen, Isaacs, and Jodie Whittaker, screened recently at the Toronto International Film Festival. Isaacs is a talented actor (Lucius Malfoy in the Harry Potter series; Michael Caffee on Showtime's "Brotherhood"; and a host of other films and shows), and he wrote a very persuasive email. Here it is:

wanted to do something weird and drop you a note to address your criticism of Good, the movie that just premiered at The Toronto Film Festival. Obviously you're free and, indeed, professionally bound to hate whatever aspects you like of the film, but I think you're way off the mark when you attack the dialect.

"Apart from the fact that there's a long standing cinematic convention of neutral english standing in for whatever the foreign language would be - think Amadeus (German), Exodus (Polish), Hunt for Red October (Russian), The Ten Commandments (Aramaic), etc etc etc - if we'd all put on cod-German accents then a number of things would happen: we'd send a message that these people are speaking their second language - which isn't true - and we'd put a barrier between the audience and the characters.

"We all felt that an English accent - as opposed to American - has the clipped and class connotations that best and accessibly approximate the qualities of German. Given that the whole point is to help the viewer to identify with Halder's predicament and journey, Hogan's Heroes meets Inspector Clouseau would have been a terrible choice.

My suggestion would be to savage us by all means, but shift your targets. Or, obviously, change your mind and rave about us as many others have done!

Gillian, I just read that article....do you think Mr Jason really
responded to this guy????
meaning I just read it thru a google alert, and you know what, it
does sound like what he would say...very articulate and to the point...