Good had its official UK premiere on 17 April, 2009; it is widely available on DVD and Blu-ray

LionsGate is handling the UK release.

There should be a UK premiere as well. Let's dig..

On March 30th, we know that Viggo will do a Q&A at the theatre called Curzon-Mayfair in London. Someone from Viggo-Works picked up their March programme with a (small) page showing the “Good” Q&A. It says “Mortensen will be present to answer your questions after a screening of the film, and we also hope to welcome co-stars Jason Isaacs and Jodie Whittaker”.

Jason was not confirmed, could be he's waiting to see if there will be a conflict of time with the HP filming.

Here's the link to the Q&A Event
Top 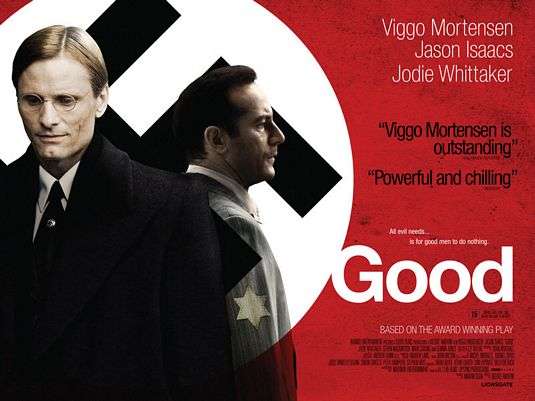 Smart to put Jason in there for the UK release. The new tagline is great too
"All evil needs .....is for good men to do nothing"
Top

MUCH better!!
The last poster was just too damn ambiguous, IMO. Plus it made Viggo look slightly creepy.
Top

I agree with all the above...it should have been that poster all along. I always wondered why Jason wasn't included and the tagline is right on....so much better in every way!!

Both the new graphic and new tagline are far less ambiguous than previous versions, and, uh, it's nice to see some JI involved! (unlike the first one with his name misspelled!!!

They (the powers that be) should have been thinking in these terms all along. Jason is definitely a draw for this movie.
Top

He's the only reason I know the film even exists in all honesty >_<
I haven't seen it advertised, so I only saw it in Jason's filmography.
Top

Hilary the Touched wrote:Both the new graphic and new tagline are far less ambiguous than previous versions, and, uh, it's nice to see some JI involved! (unlike the first one with his name misspelled!!!

Yes Exactly! A far better poster. It really drives the idea home as to what the heck the film is actually about. And I'm very well pleased that someone thought

"Heeyyy. This poster is almost finished but it needs sumthin .. hmmm.. Oh yeah how bout that other guy! Yeah that'll work. " Yes I'm banking that the new poster layout with the addition of Jason's gorgeous profile will help the ticket sales in the UK to be more impressive than it was in the U.S.
Top

Some nice comments about a 26 March screening in the UK, which Viggo attended--
http://protowilson.livejournal.com/209640.html
Top

The comments are very much in line with what I witnessed at TIFF. He gives the impression of being quite shy at times, although still able to articulate his thoughts carefully and with passion.

Hell of a nice guy, too.
Top

Mr Jason confirmed this evening, after the Empire Awards, he will be
attending the screening of Good, tomorrow with Viggo...thanx Mr Keith!!!