An event series filmed on location in Jerusalem. Jason plays Peter, an FBI agent who investigates the murder of an archaeologist. While doing this, he uncovers a 2000 year old conspiracy.

Marie, Susan, Helen and I took our chance and went to ABQ to see if we can get to see Jason on set of DIG. We were so lucky to get permission.
This is the last picture I took at the wrap time around 10:30 PM. Jason had been through several sets of push-ups of 20 each to prep for the last scene (we were impressed!), sprinting across the street and running up the steps.
He was sweaty, dusty and smudged (make-up) and still managed to look great when I asked for this picture. This was pitch-dark but my Canon came through!
I'm really proud of this one so I'm posting it first. 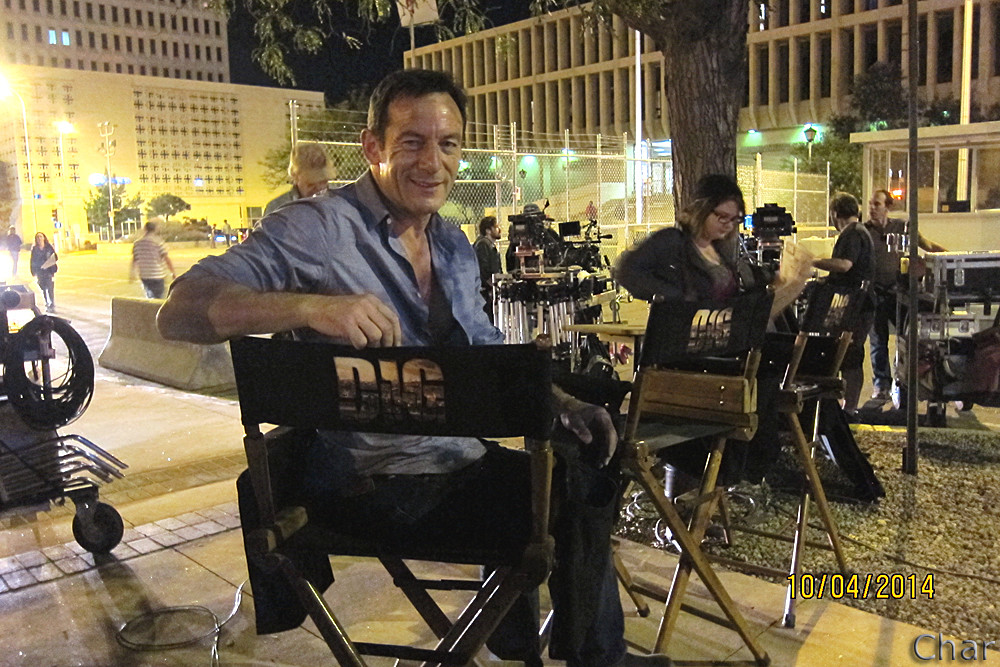 Thanks Char, it's a great picture.

Thank you for the picture, Char.

Well done on getting access to the set! Lucky you - no doubt you were privileged because Jason knows you are all "mostly harmless".

Thanks for sharing the photo, Char.
Top

Lovely picture, thank you Char - and as for the enterovirus comment, OMG! Hope that works out!
Top

Thank you so very much, Char.....this pic is fabulous!! He is so lovely and you are a dear for sharing this wonderful time with us.

We were given a contact person and he gave us the address of the base camp for that day. Jaso had told us that if we wanted to, we all could be extras but they were shooting a formal dinner scene so we have to dress up in formal wear. We were so tempted but alas, we just showed up in regular street clothes.

Jason greeted us quickly at the base camp where all the trailers/trucks parked then he had to hop in a van to be driven to set. We were herded into another van with the costume people.

The shooting was only a couple of blocks away. They closed the street and the set was to be in front of the US Consulate building in Jerusalem. The signs were very realistic!
Jason came over to chat with us and we snapped photos when we could but it seemed rude to keep clicking while he was talking to us so...not many pics as a result.
Of course we couldn't and didn't take any of him while DIG cameras were rolling. 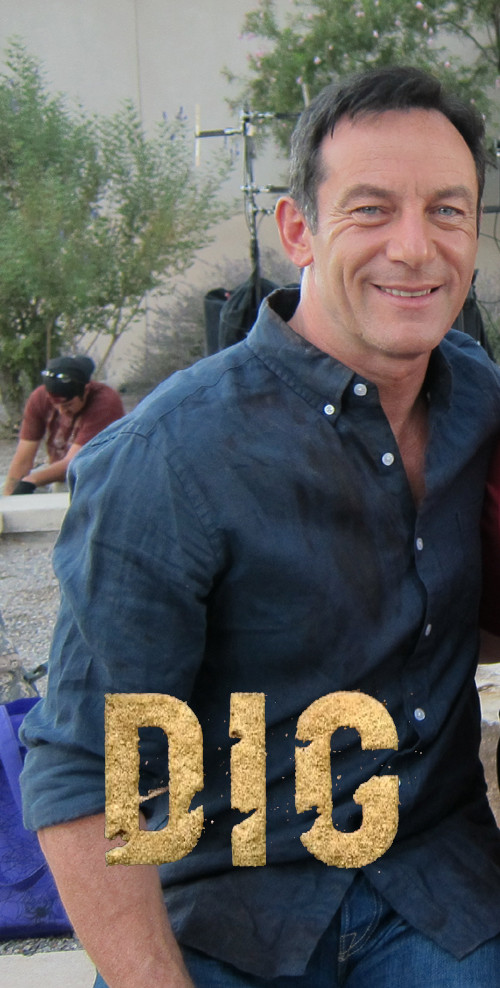 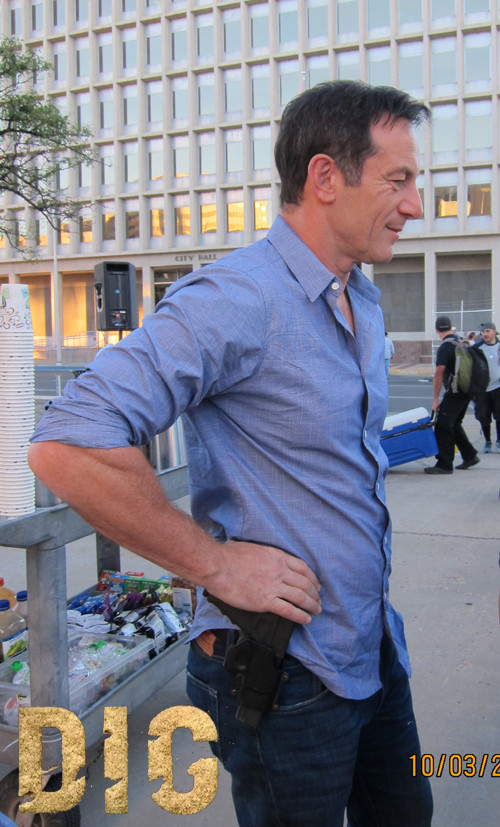 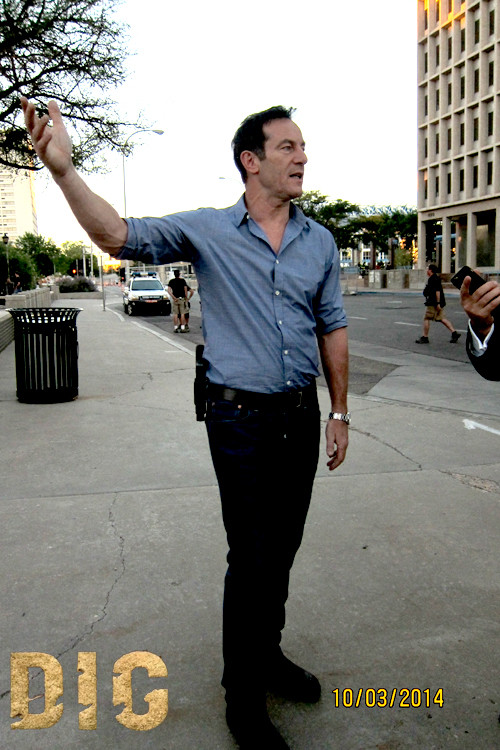 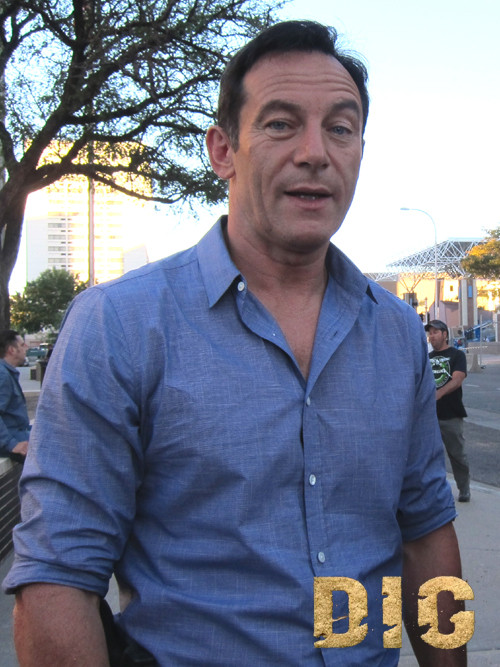 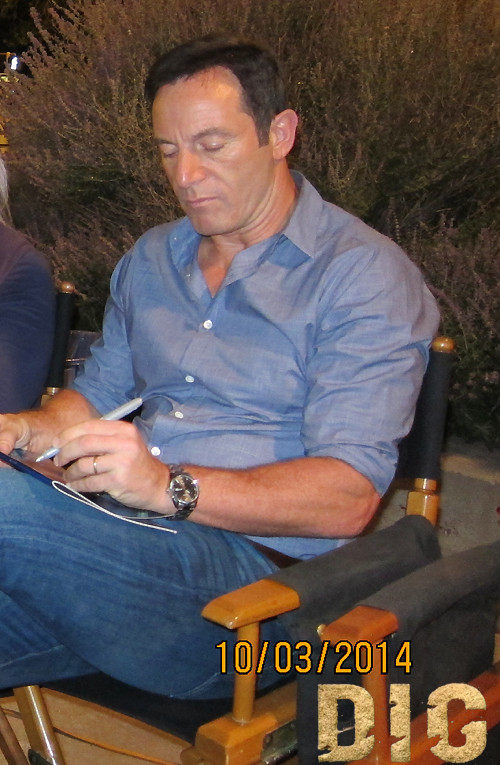 Make up lady trying to fix his face. 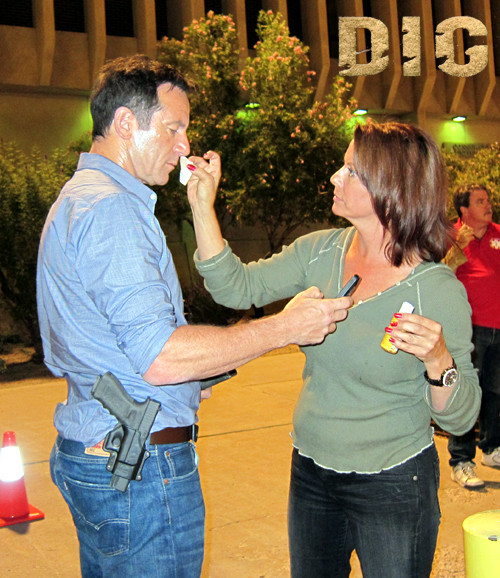 At first he had the dark blue shirt on. Later the costume lady brought him the light blue one and he just whipped off his shirt and put on the new one right there! We all got an eyeful but too stunned to get our cameras LOL. That would have gotten a lot of hits and comments on social media! I should have asked for him to do it again in slo-mo

Jason was so awesome in all the scenes. He never had to read scripts. His (Chicago)dialect coach, Steve, said Jason was wonderful and so nice

Jason had to do a lot of running across the street and up and down the steps. He is in great shape.

Gideon Raff the Exec Producer and Director was so nice to us. At one time while they were waiting for the set-up, he announced on the speaker that he was dedicating a song to the Jason Isaacs Fan Club and proceeded to sing "Why do birds..suddenly appear, every time you are near? Just like me, they long to be..close to Jason..." He sang a few verses and it was hilarious!

Anne Heche came to the set to do one scene with Jason. She talked to us a little bit. Pretty and petite..at first when I spotted her I thought..EMMA is here! Their facial bone structures very similar, IMHO.

Jason played music from his iPhone on the speaker during downtime. he used his and Lily's playlists. The extra s and crew were kind of dancing around so when it was a wrap for the extras, Gideon lined everyone up in the street and told them to do the flash mob dance to 'Staying Alive' that Jason played. He said it would be in the DVD. We joined them and I went and dragged Jason in. He danced and shook his tush for the camera!!
Then he leaded us into a conga line but he had to stay close to the speaker for fear of losing the signal. It was so much fun and the extras were happy. They had been there since 7 AM in their gowns and high heels and tux.

Then there was one last scene of that evening. He was supposed to be chasing the bad guy through the Jerusalem underground tunnels/ So before each take, he dropped to the ground and did a set of around 20 push-ups. During these, Gideon stuck his head out and smirked at us, kind of asking 'Are you enjoying this? I just smiled very sweetly back at him "Of course, we are!"

When it was over, the sound guy came to collect our headsets and Jason's mic. He ripped off the mic attached to his chest, said ouch and then proceeded to unbuckle and unzip his Levi to pull up the wire attached to his ankle unit. It was dark but we were right in front of him

We couldn't see anything but the act itself was

We hopped into the van with him, said goodbye and thanks at the base camp and floated back to the hotel.

BIG THANKS to you, Jason! For your kindness and for appreciating The Lost Girls.
We will do our best when DIG comes out to make some internet waves, won't we, Lost Girls?
Top

Thanks for that amazing encounter story, and all the pictures, Char.

The encounters just keep getting better and better, wonder where it all will end?

Like servalan said, Jason trusts us in that kind of setting now. He was so sweet and made sure we had the headsets to listen and be close to the action or at least watch the camera feed. Had the crew move the director chairs around for us and pointed out the catering truck. It also depends on the director who is the BOSS on the set. If the director is nice and friendly and relaxed, all the crew will be more friendly and the atmosphere is more fun.

He trusted us to haul his precious messenger bag around, moving from point to point avoiding the camera angle sweep.
It was only the second day of the shoot in ABQ. Everyone was new so I think Jason was kind of glad we were there for him to chat with. Everyone else was kind of scared to approach the STAR

This will change so fast because Jason is so nice to everyone.

I know that all the extras signed an agreement that they would not approach the talent on set.That is standard on any set.
At the end one guy came to ask for a photo with him and he happily consented.

It made us proud to be Lost Girls

Thanks for the story and all those lovely photos, Char.

I especially like that first close-up you posted today.

I see he's letting the grey show at the sides of his hair for this part. I like it, it gives him a bit of gravitas.

I do hope Dig gets shown in the UK on a free channel.
Top
Post Reply
24 posts